Jesse McCrary, Jr., formerly of Miami, was the first African American to serve as Secretary of State in the Florida Cabinet since Reconstruction, as well as the first African American assistant attorney general. As a student at Florida A & M University, McCrary helped organize sit-ins in Tallahassee against racial discrimination. After graduation, he served in the United States Army and received an honorable discharge as a First Lieutenant. McCrary went on to become the first African-American lawyer to argue before the United States Supreme Court on behalf of a southern state. He later became the first African American in the south to be appointed to the United States Circuit Court of Appeals. During his life, McCrary argued many landmark state and federal cases, including Neil v. State, which prohibited the dismissal of jurors solely on the basis of race. In 2002, the Florida A & M College of Law founded the Jesse McCrary, Jr. Chapter of National Black Law Students Association and in 2013, the Little River Post Office in Miami was dedicated and renamed after him in recognition for his work as a civil rights pioneer. 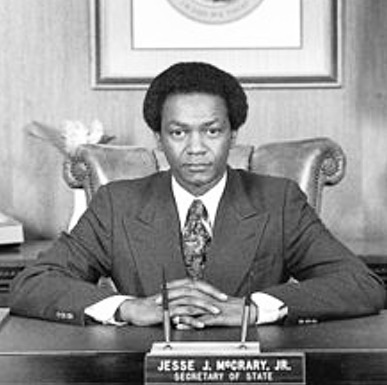